The first ever brain pacemaker was recently implanted in a woman suffering from the early stages of Alzheimer’s.

Kathy Sanford was the first of 10 patients with mild or early stage Alzheimer’s to take part in a new study. The study’s intent is to determine whether a brain pacemaker can improve cognitive and behavioral functions in those affected by cognitive illnesses like Alzheimer’s and other forms of dementia.

How Does a Brain Pacemaker Work?

The FDA-approved study that began in October 2012 is being conducted by doctors and researchers at Ohio State University’s Wexner Medical Center and is scheduled to end in 2015. 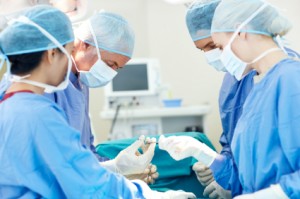 The device dubbed the “brain pacemaker” works much like a cardiac pacemaker. Rather than send signals to the heart, the brain pacemaker utilizes Deep Brain Stimulation (DBS), sending signals to the brain to regulate its activity. In patients with cognitive illnesses like Alzheimer’s, brain activity is comparatively abnormal and doctors hope the DBS signals will normalize the activity more, improving cognitive and behavioral function.

Dr. Ali Rezai, a neurosurgeon and director of the neuroscience program, is heading the study along with Dr. Douglas Scharre, neurologist and director of the division of cognitive neurology. The hope is that the brain pacemaker will effect improvements in the frontal lobe and neural networks of the brain, which are involved in most cognition and behavior.

Doctors have been evaluating Kathy Sanford regularly, monitoring the effects of the technology. Dr. Rezai said, “If the early findings that we’re seeing continue to be robust and progressive, then I think that will be very promising and encouraging for us. But so far we are cautiously optimistic.”

Significance in the Medical World

More than 5 million Americans are currently suffering from Alzheimer’s, the most common form of dementia today. Alzheimer’s also just recently passed cancer and cardiovascular disease as the most expensive illness in the United States, costing between $157 billion and $215 billion a year.

This study could provide hope for millions of people looking for ways to slow to their cognitive decline. Many Americans using Long Term Care services suffer from dementia and the number is growing. By 2050, it it estimated that more than 13 million seniors will be affected by Alzheimer’s.

Kathy Sanford explained her reasoning for participating in the study: “I’m just trying to make the world a better place. That’s all I’m doing.”