Speaking on a cause close to his heart, Seth Rogen spoke to a mainly empty Senate subcommittee last week about the need to increase funding for Alzheimer’s research.

The actor, whose mother-in-law suffers from the disease, gave a touching, and 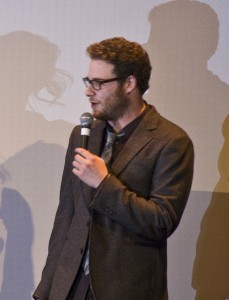 at times funny, speech during a Congressional hearing for the Senate Appropriations Subcommittee on Labor, Health, and Human Services. He spoke of the hardships endured by his wife and her family, as they watched her mother slip away into the grips of dementia.

As Rogen pointed out, many people think of Alzheimer’s as simply asking the same question over and over and wearing mismatched shoes, but it is much more than that. He believes it’s crucial to educate people on “the real ugly truth of the disease”, which often progresses into forgetting loved ones, forgetting how to speak, and forgetting how to feed, dress, and bathe oneself.

The comedian created an organization called Hilarity for Charity to help raise awareness about Alzheimer’s and educate young people about the growing issue. The most costly disease in the nation, Alzheimer’s is currently the 6th leading cause of death in the United States, affecting more than 5 million people. Rogen believes more funding should be allocated to Alzheimer’s research to help find treatment or a cure.

During his speech, he said that there is “no way to prevent, cure, or slow progression” of the disease. While this may technically be true, as there is no way to prevent the disease completely, there are certainly plenty of ways to help reduce your risk of developing dementia that have proved extremely effective in various studies.

A healthy diet is one of the greatest deterrents of Alzheimer’s. A recent study even specifically linked high cholesterol levels with an increased risk of dementia, indicating that a diet high in animal products may be partially to blame for the high rates of Alzheimer’s across the United States, compared to other countries who have much lower rates of dementia and whose diets include just small percentages of animal foods.

The pesticide DDT has also been linked to Alzheimer’s, so purchasing foods that haven’t been exposed to synthetic pesticides may help reduce the risk of the brain disease.

Exercise is another great way to reduce the risk of dementia, as it stimulates brain activity and helps increase brain growth. In a recent study, when a group of older adults engaged in just 3 brisk 40-minute walks a week over the course of the year, they experienced 2% brain growth. Those results stood in stark contrast to those who didn’t exercise and experienced brain shrinkage of about the same amount. Being overweight can also have negative effects on the brain and increase the chances of memory loss.

It’s hard to say whether more government funding is the key to the Alzheimer’s epidemic sweeping the nation, as millions of dollars are already pumped into researching the disease annually. Improving our diet, increasing our exercise regimen, and keeping our brain sharp by socializing and engaging with others is a good start to solving the problem, though.

Read more about eating to prevent dementia or find out how exercise affects our brains.