A new blood test is making waves across the research community as researchers claim it can accurately predict whether or not a healthy person will ever develop Alzheimer’s disease.

Researchers interested in finding a way to test for Alzheimer’s lead the study that looked at key indicators in the blood. They drew blood from hundreds of healthy adults over the age of 70 in both New York and California and waited to revisit those same patients. Five years later, 28 of those patients had developed the debilitating disease and scientists drew their blood again to search for a common link.

The researchers first looked at lipids and surprisingly, found their answer there. The 28 seniors who had developed Alzheimer’s all had low levels of 10 specific lipids in the blood. After this discovery, they wanted to confirm that the factor wasn’t simply a coincidence and tested the blood of 54 more Alzheimer’s patients only to find the exact same lipids were lacking.

“We were surprised,” said Mark Mapstone, a neuropsychologist at the University of Rochester Medical Center and lead author of the study. “But it turns out that it appears we were looking in the right place.” 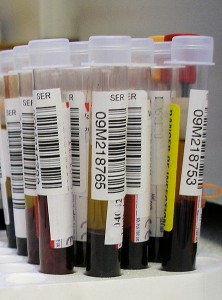 that had people excited, but the methods were much different. One such test used an eye exam to determine whether any thickness in the retina had been lost, a potential indicator of the disease. Another has patients sniff peanut butter, as olfactory senses are one of the first to diminish when the disease manifests.

None are as accurate as this new blood test seems to be, though, and none can test so far in advance of the diagnosis. The test’s prediction accuracy is greater than 90%, according to the study.

The test is still in research and development stages and if it does eventually end up being successful, it still won’t be available in doctors’ offices for many years.

The test raises some ethical questions, though, patients and doctors must discuss if it was to ever make it into the medical world for application. Knowing years in advance that you will be diagnosed with a life-altering disease like Alzheimer’s can bring about an extreme psychological toll. On the other hand, though, it could help encourage people to live healthier lives to potentially reduce their risk.

Many studies have found that the risk of Alzheimer’s can be greatly reduced by healthy eating and regular exercise, both of which provide substantial benefits to the brain. A recent study found that regular walks can actually help the brain grow, while not exercising leads to brain shrinkage in a very short amount of time.

A separate study found that singing can help improve dementia in seniors with Alzheimer’s, so it’s hard to say whether or not diagnosis is a sure thing if you drastically alter your lifestyle and include a healthy diet, exercise, socialization regimen that includes ways to boost your brain.

This new test will bring about many new questions, but there is no doubt that eating healthy, getting exercise, and engaging with people on a regular basis can drastically help reduce your risk of developing dementia. Read more about eating to prevent dementia here.