Taking time out of your day for a walk has numerous benefits – preventing obesity, minimizing depression symptoms, and lowering blood pressure are just a few. New research says that regular walks may also help increase brain size and thereby, decrease the amount of aging in the brain.

The prevalence of Alzheimer’s and other cognitive diseases is growing rapidly. At a time when the number of Alzheimer’s patients is expected to triple by 2050, it is crucial to understand different ways to help improve our brain function and reduce the risk of these diseases.

Researcher Dr. Kirk Erickson from the University of Pittsburgh led a study to determine the effects that walking has on the brain. Participants included 120 men and women between the ages of 55 and 80. For one year, they all took a brisk 40 minute walk 3 times a week.

After a year of consistent walking by the individuals involved in the study, researchers found that certain areas of the brain, most noticeably the hippocampus, had increased in size up to 2%. Researchers explained their findings at the American Association for the Advancement of Science’s annual conference, which took place in Chicago. 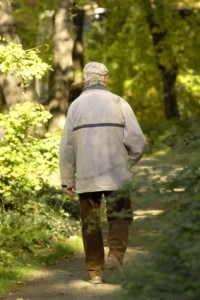 “Physical activity seems to be one of the most positive approaches for affecting cognitive brain health and cognition in late adulthood and throughout lifespan,” Erickson said.

The brain growth effectively takes up to 2 years off of the brain’s age, researchers said. In comparison, a group who participated in simple stretching exercises over the course of the year saw the usual results of aging – shrinkage of the brain of about 1.5%.

Erickson added, “The brain remains modifiable well into late adulthood. Even though brain shrinkage and cognitive decline occurs, it doesn’t seem to be as inevitable as we once thought.”

Most Americans spend the majority of their day, if not all of it, being sedentary and inactive. Sitting at work for hours on end, then returning home to continue sitting until bedtime is a dangerous and unhealthy way to live, but it has become the norm in our modern society. This study shows that even just a minimal amount of exercise can reverse the cognitive effects of that sedentary lifestyle and help add years to our lives.

“We aren’t training older people to run marathons,” Erickson continued. “We are getting them up and moving at a moderate exercise level several times a week and seeing enormous improvements over a period of several months.”

Researchers stress that finding an exercise you enjoy is a crucial component of the equation. If you force yourself to engage in a certain exercise that you don’t particularly enjoy, chances are you won’t stick with it for very long. Rather, it’s important to discover which type of exercise you thoroughly like doing, whether it be walking, swimming, hiking, playing tennis, or another activity, and sticking with that to ensure you don’t end up returning to your sedentary ways after a short period of time.

Exercise is one of the best tools to fight against the degenerative effects of aging. Read more about how exercise can help keep you healthy into older age and prevent a number of diseases.